How does tension of a scene means?

When you’re structuring your novel, you’re often advised to follow this type of scheme: 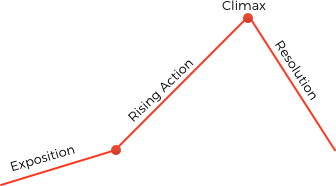 Although accurate, this type of structure may be too simplistic and plain, as it implies that each scene has to be more intense than the last. This is not only unnecessary, but can sometimes be counterproductive.

Every story needs breaks. Thus, the best thing is to take the previous image as a general reference, but without forgetting that your structure will actually resemble the image below: 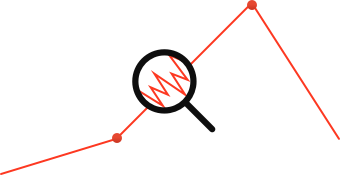 That is, a narrative of increasing intensity, but with its own ups and downs. Let’s see the types of scenes you can resort to:

Generally, expository scenes show more than tell and provide us with information about the characters and their lives. They are useful to help the reader better understand the story, but do not forget that they slow down the narrative. Use them with care!

Position: They can appear anywhere in the story, but are more frequent in the first act.

These scenes help us shape the characters’ fictional universe. As with expository scenes, too many can result in a boring story but, used in moderation and at the right moment, they will give depth to your novels.

This is when everything changes for the main character, when the story’s conflict suddenly arises. For example, in a detective novel, the inciting incident is usually a murder.

Position: There is only an inciting incident in the story and, sometimes, it doesn’t even appear in the narrative, but before it begins. Other times, it appears after a while, because its is preceded by a long exposition.

Depending on where you place the inciting incident, you’ll be creating a kind of story or another. This is what Orson Scott Card called MICE quotient, and helps you determine the exact point where to start and finish a story.

The conflict (a struggle or clash between opposing forces) is a fundamental part of any story.

Position: It usually appears in the first act and, sometimes, right at the beginning of the story.

They are special scenes where the plot changes or takes a different direction. As readers, they leave us with the mouths open or very intrigued by what has just happened.

Position: Both the number and placement of the plot points depends on the story’s number of acts. In a typical three-act structure (beginning, middle and end), you’ll usually find two or three plot points, although there might be more.

The essential plot point in every three-act structure is located in the transition from the first act (beginning) to the second act (middle). Besides, it’s common to find another plot point in the middle of the second act, so that the narrative tension does not decay.

These are the scenes where the action moves forward. For example, in a detective story, the car that has been chasing the protagonist reappears and the hero must elude it.

In contrast to the previous types of scenes, these are used to reduce the story’s tension. They can be resolution scenes (discussed below), setting scenes, or just scenes where the plot moves forward but in a gentle manner, so that the reader can take a break in the middle of action.

Halfway between a scene of increased tension and a plot point, revelation scenes are those in which an element or piece of information that is vital to the plot is discovered by the reader and/or the main character.

The scenes of crisis are quite similar to the climax scenes described below, but without their intensity. They refer to those moments when the protagonists overcome the small obstacles they encounter in their way.

The climax scenes resemble the scenes of crisis in the sense that the hero must also overcome an obstacle, with the only difference that, this time, it is the definitive obstacle, the one that makes the difference between achieving his/her goal or not.

Intensity: Very high. It is the most intense scene.

Position: There is only one climactic scene by story, and it always precedes the final act.

Once past the threshold of the climax, and deeply into in the last act, we find resolution scenes. Their intensity is much lower, but they are very necessary if there are still things that haven’t been explained or if you want to tell what happens to the characters once the adventure is over.

Position: They are placed in the last act, after the climax.

We can also find examples in which two or more of the types of scenes mentioned above are mixed (for example, a scene of increasing tension in which there are descriptions of the atmosphere), but one type of scene will always prevail over the other.